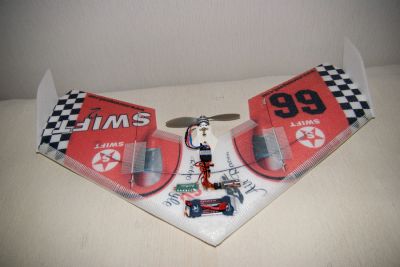 The MS Composit Swift II is a EPP made park flyer / delta winged stunt with a wing span of 80 cm. With the 2S 1300 mAh battery it weights around 320 grams and has a flight time of 10-15 minutes depending of throttle use. The plane is somewhat good also as a glider, which can increase flight times significantly if the motor is only used for climbs. It's easy to fly, hard to break but requires a transmitter that support delta mixing.

Original constructions plans from MS Composit will suggest placing all electrons on the bottom. However, I figured those would be safer on the upper side and changed the placing. The servos can still be inserted from the bottom after making cuts for the servo arms. The servo horns that come with the package need to be replaced if the placing is changed in this way. The curved black line visible in the picture is a bent carbon fiber plate that provides additional wing rigidity. Fiberglass tape has been used in leading surfaces for additional strength.

The original white molded plastic motor mount broke totally after about 150 flight. It had required glue several times before due to cracks but eventually that wasn't anymore enough. The plastic seemed to become brittle in cold weather and has since been replaced with a self made aluminium mount.